Khing Hnin Wai’s video of herself dancing while seemingly unaware of Myanmar’s military coup unfolding in the background has gone viral since Monday. 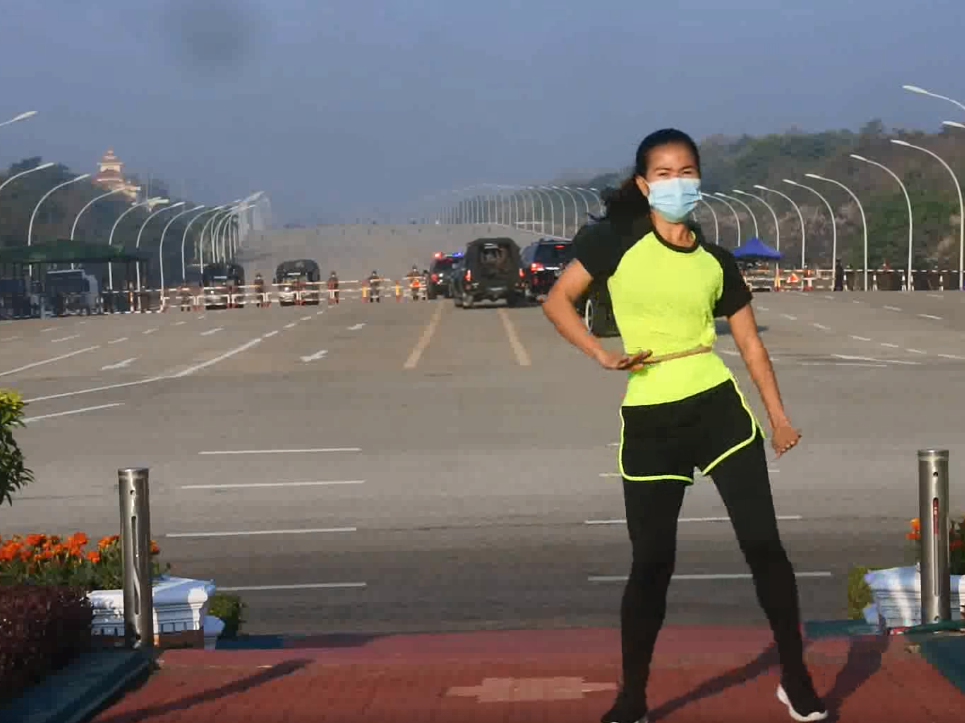 Khing Hnin Wai’s video of herself dancing while seemingly unaware of Myanmar’s military coup unfolding in the background has gone viral since Monday.

Fitness instructor Khing Hnin Wai has been filming herself performing aerobics on the same street in Myanmar’s capital city for months. But none of her videos has gone quite as viral as the one she posted on Monday, in which she inadvertently captured the country’s military coup unfolding in the background.

In the video, she can be seen dancing energetically to techno-pop while wearing workout gear and a face mask, seemingly oblivious to the convoy of black vehicles streaming down the road behind her as Myanmar’s military seized control of the government.

A woman did her regular aerobics class out in open without realizing that a coup was taking place in #Myanmar. A Military convoy reaching the parliament can be seen behind the woman as she performs aerobics. Incredible! pic.twitter.com/gRnQkMshDe

Khing Hnin Wai posted the nearly three-and-a-half minute video to her Facebook page, on which she lists her job as a P.E. teacher. Her video has since garnered more than 67,000 views, and has also been circulated widely on other social platforms, including in one tweet that’s racked up nearly 60,000 likes and 25,000 retweets.

“Before I heard the news … in the morning, the video I made for the aerobic dance competition has become an unforgettable memory,” she wrote on Facebook, according to Al Jazeera.

Resty Woro Yuniar, a reporter for the South China Morning Post, wrote on Twitter that the music in the background is an Indonesian song called “Ampun Bang Jago,” which she said was “used widely on TikTok during the Omnibus Law protests last year.” Those protests in Indonesia targeted government reforms which critics said would harm workers and the environment.

She recorded the video on a roundabout on a main road leading to the parliament complex in Myanmar’s capital Naypyidaw, according to the BBC, which said it had been in contact with Khing Hnin Wai and she “confirmed the video is real.” NPR has not independently verified its authenticity.

After others on social media cast doubts on the video’s authenticity, Khing Hnin Wai shared another Facebook post with several videos of herself dancing in the same location, saying she had been working out there regularly for the past 11 months.

“I wasn’t dancing to mock or ridicule any organisation or to be silly. I was dancing for a fitness dance competition,” she wrote, according to the BCC. “As it isn’t uncommon for [Naypyidaw] to have an official convoy, I thought it was normal so I continued.”

Lenovo Legion might be the first 5G gaming phone

admin - February 13, 2020
0
The Lenovo Legion is posed to be the first 5G gaming phone, and we now have every reason to believe that it'll have...

A billion extra contactless payments in year since limit increase

The Best Tips for Using Zoom